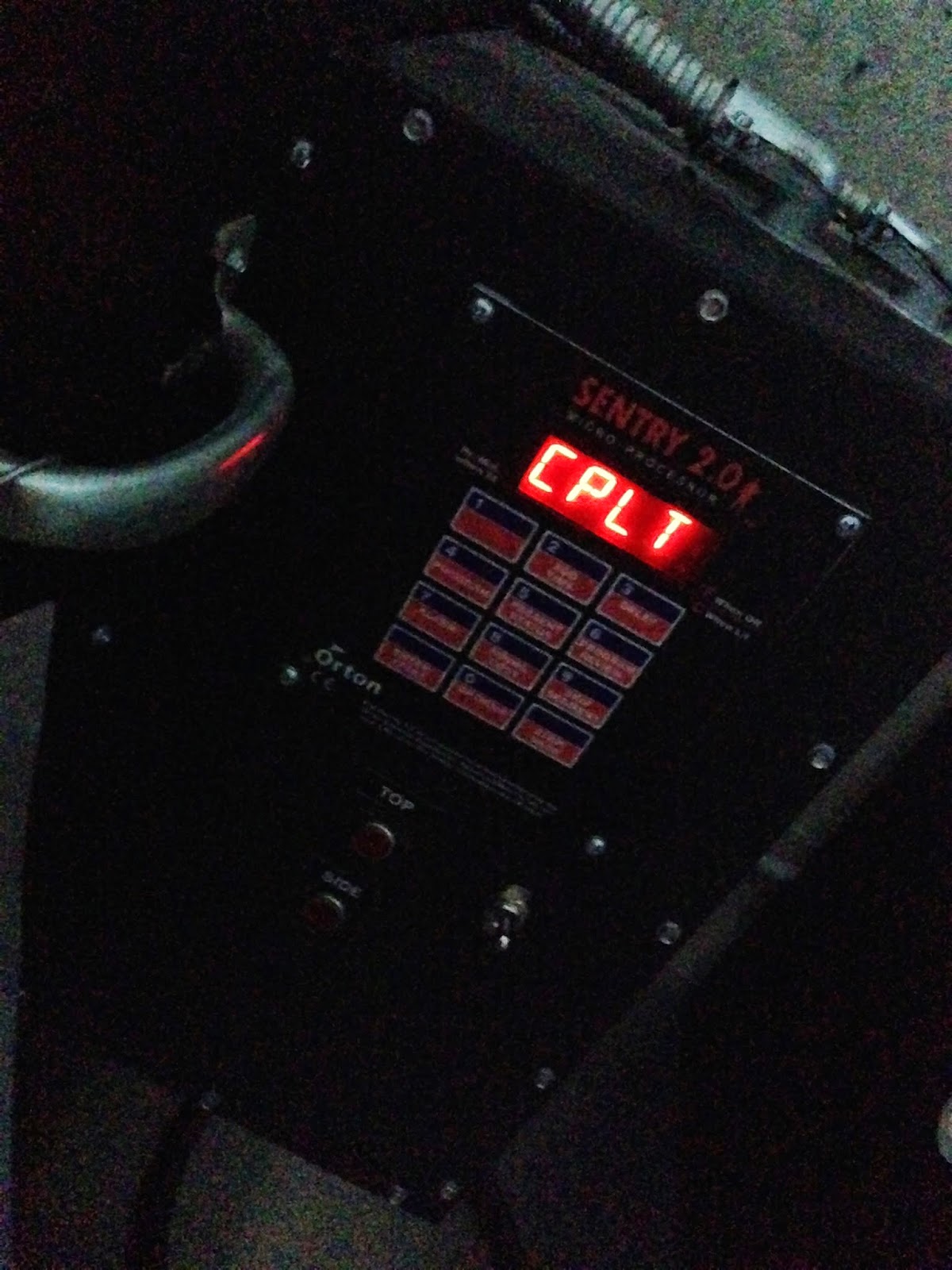 So just a few more projects, and this session is a wrap.  Since the last post I've had time to get a few more fusings finished, pack the majority of my work up and ship it home, help clean the campus, fly home, and finally get some sleep in a bed that my feet don't hang over the edge.  As a class we also had the opportunity to get off campus for a day of taking in the glass side of Seattle.

Let's start with the final projects... 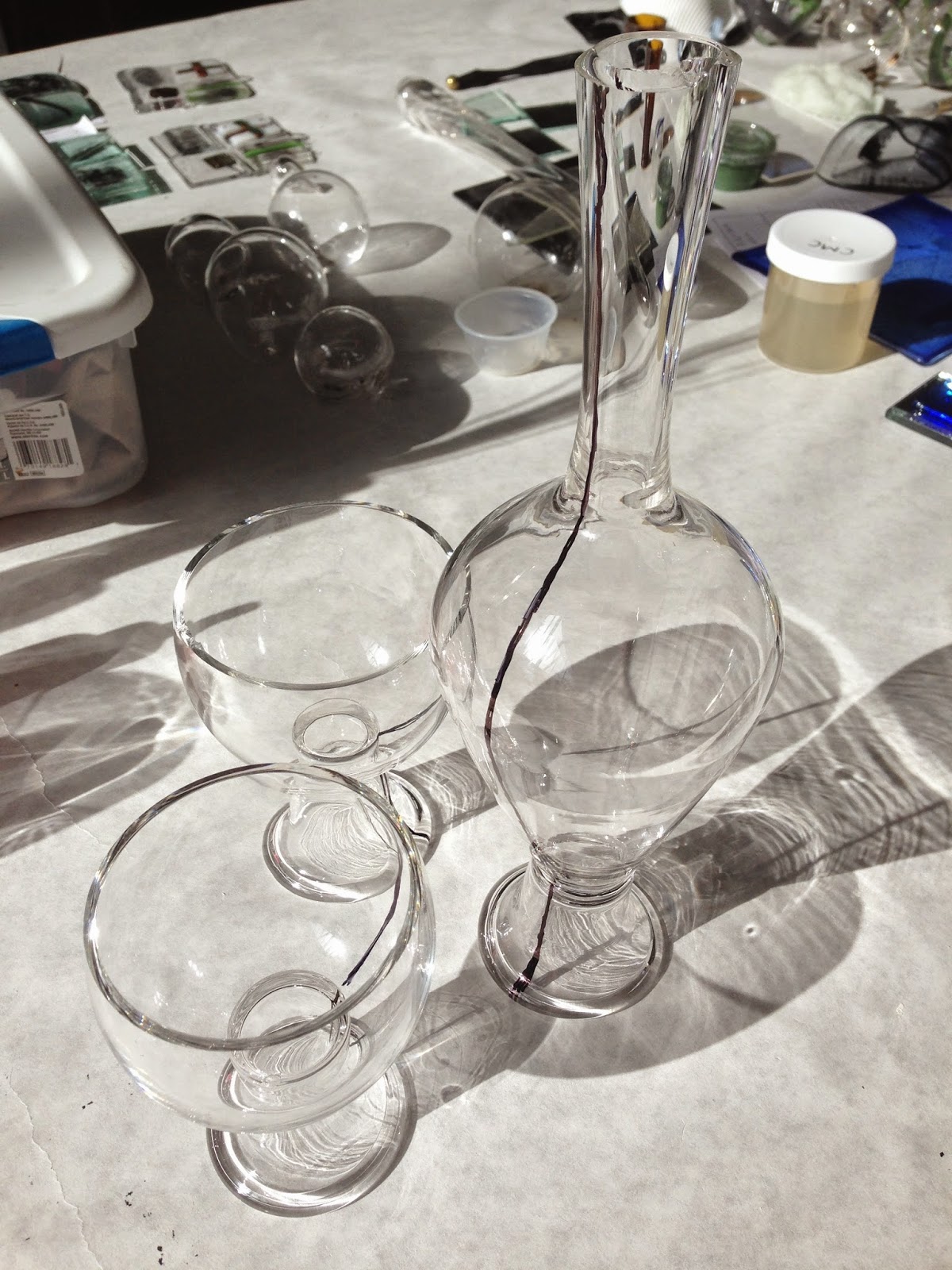 One of the things I really enjoyed about my work area was the sunlight that would come in during the morning.  The light refraction on the table is very beautiful, and something I want to keep working with.  Even going so far as to draw on the glass to make stronger marks/shadows on the table to help compose it a little better.

So this started with the bottle molds from before, now it was a matter of making some vessels in the hot shop and cold working them to a point of ease of removal for the finished piece.  This means using a thicker vessel than normal, so it would be more likely to hold it's shape as the mass of glass beads inside heated up.  So I was able to get away with some things I normally don't try to in regards to these vessels.  They were thicker, they weren't puntied, and barely cold worked at all.  The trickiest part by far was slicing them in half, especially for the long neck vase since all it would take is one slight over-caffeniated twitch to bind that long neck in the blade and snap it. 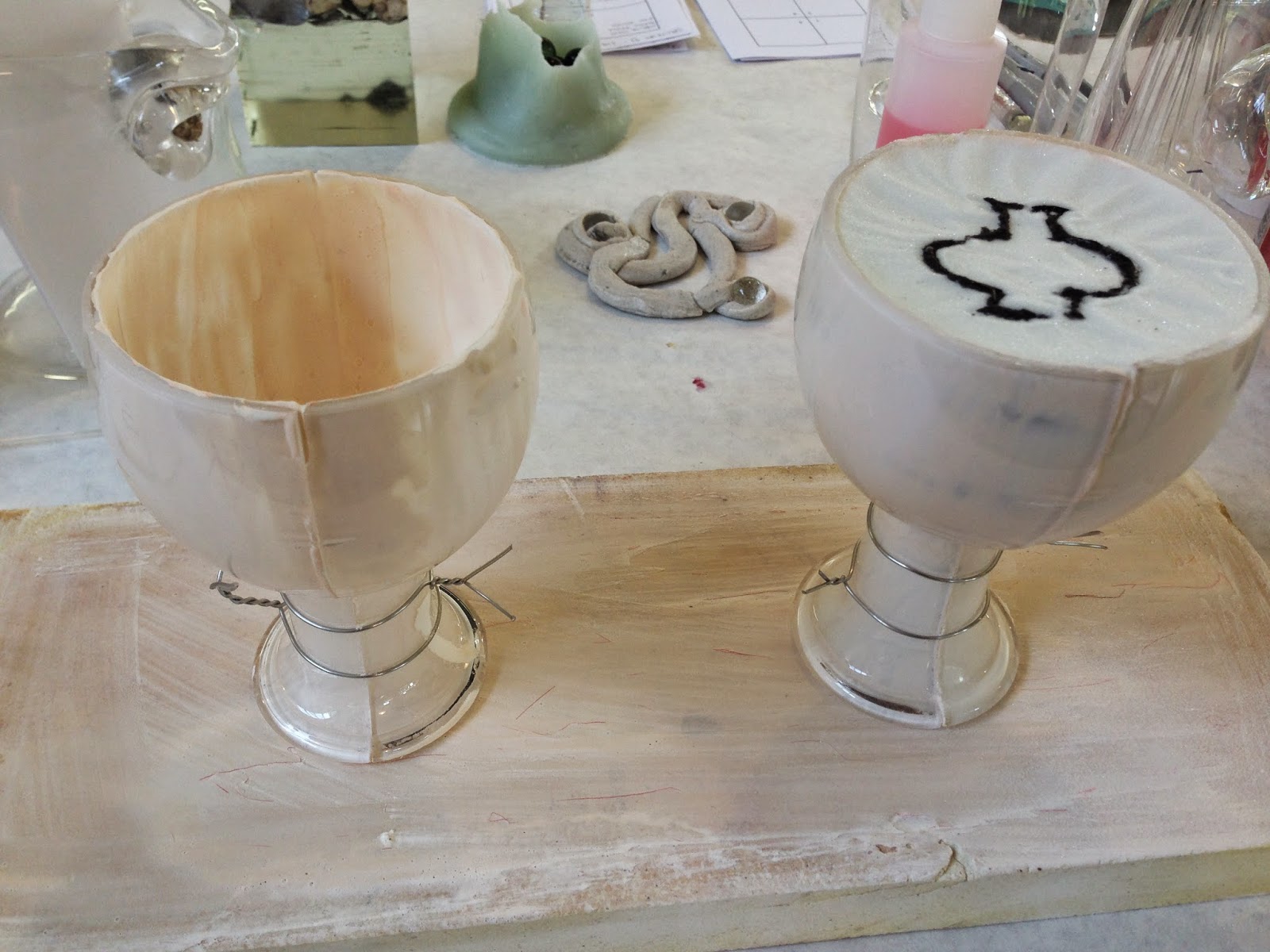 Once the pieces were sliced in half, I then had to remove the glass that was the bottom of the cup and the top of the foot.  This part took a little longer since the drill press was broken, as a result I had to do it by hand with a Dremel and diamond bits.  Once that was finished, then it was sandblast the interior, and notch the outside a few times.  Then coat the halves with an alumina oxide and kaolin clay mixture, once it was dry I could wire the halves together with some stainless steel wire.  After all of that... I could begin filling the interior with glass to fuse.  Since it was a test, nothing too fancy, but I wanted to continue to use some of the black powder I used on the last bottle mold, for some decorative elements. 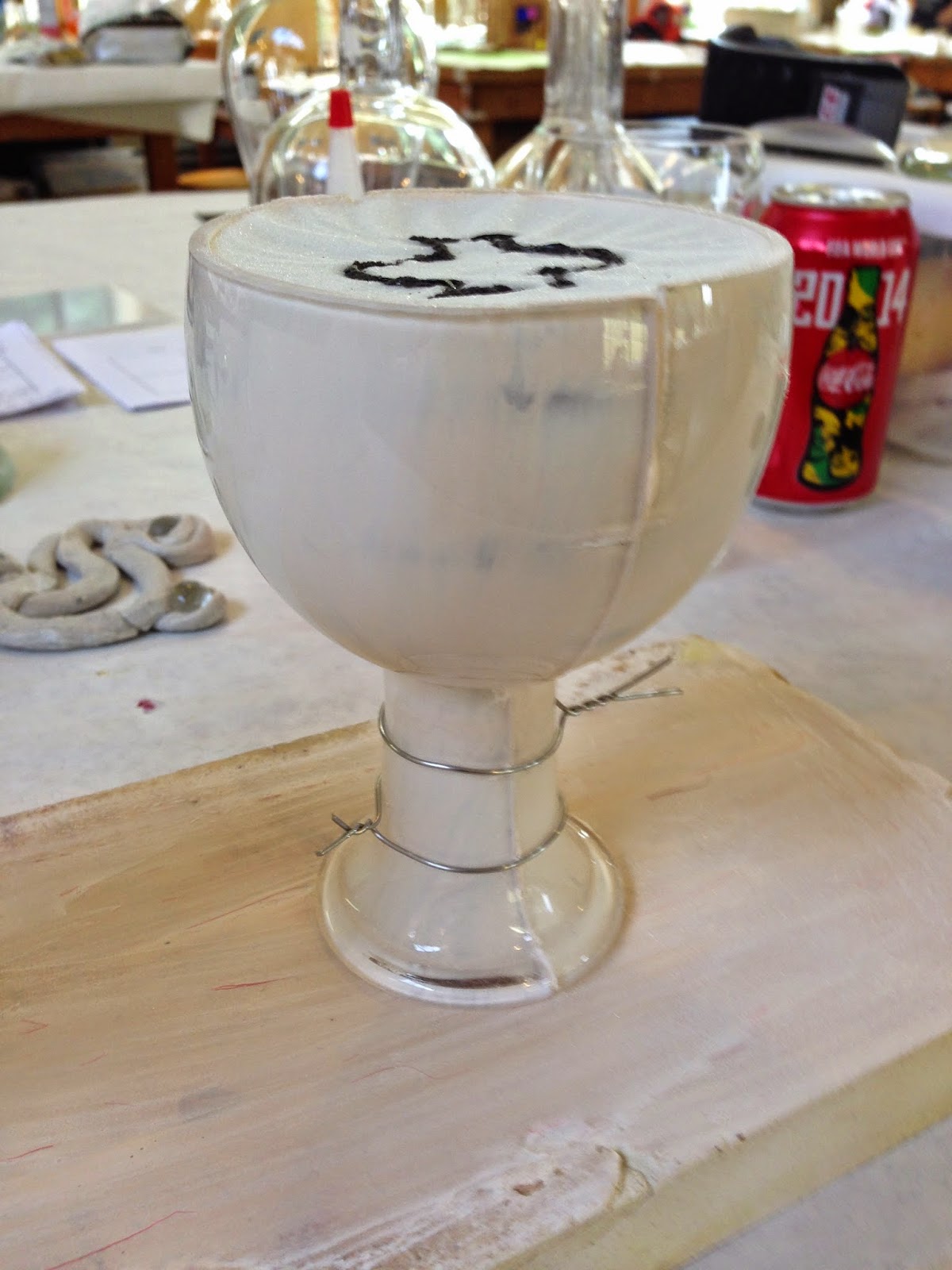 Once these molds were filled, it was just a matter of getting them in the kiln.  Bring them up to 1275 and hold for about 20 minutes, then cool.  Sorta like baking cookies.  Anyway, I did quite think it all through and did have a minor set back. 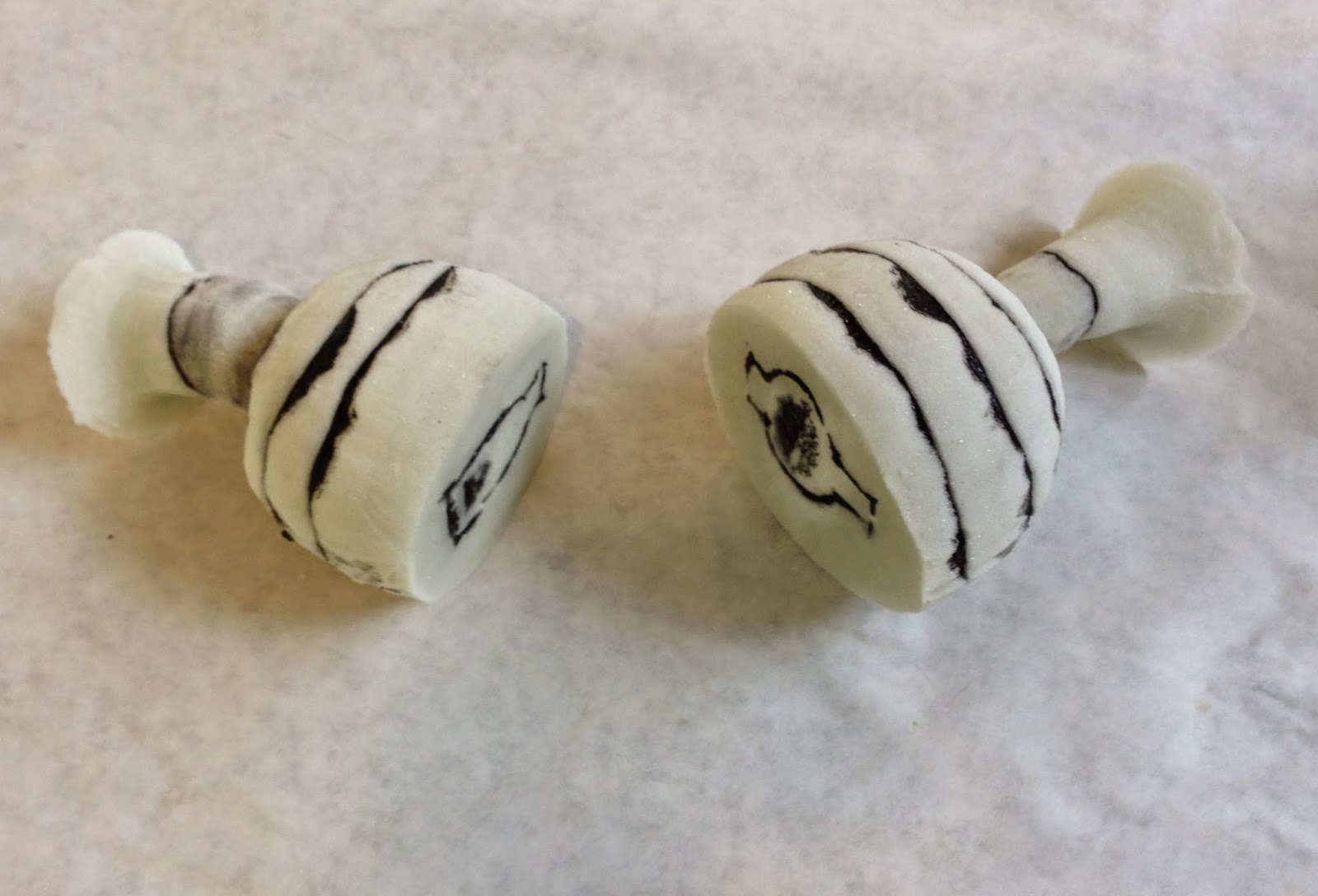 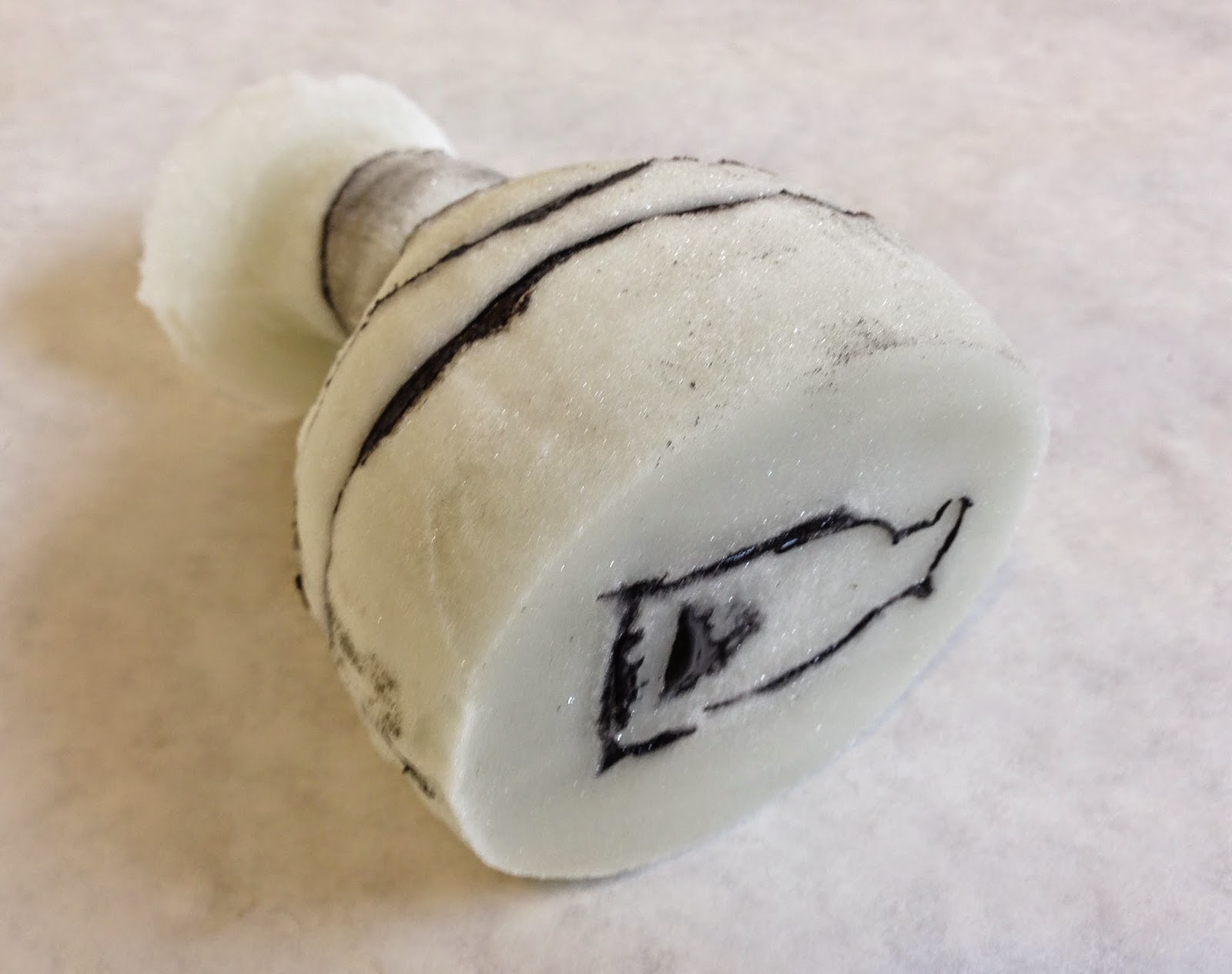 I didn't figure on the weight of the top making the cup fall over.  It's fairly obvious now, thanks hindsight!, but at the time I was more worried making sure I could make the last firing schedule on time.  As objects I don't think they're bad... now that being said, it's not what I wanted, but again, they're not bad.  Since these it was a matter of sitting down and thinking about how to correct this mishap, which was easy to figure out... fire the damn thing upside down.

One word that used to describe these was flaccid, which given the rampant machismo in any given hot shop, I find that statement very amusing.  The form itself is taken from a 16th century venetian goblet design and the whole fact it slumped over but retained its shape seems to be a good statement to a current predicament of studio glass these days.  That glass is being used for a more narrative conversation and the pursuit of perfection in technique is falling to the wayside.  Not that technique will ever completely disappear, but the shift of the paradigm is more noticeable now than it ever was.

Up next was the long neck.  This one I wanted to use for one of my manipulation assignments.  Yes we had assignments, and in a way it was good, it gave us something to focus on during the session so we weren't flailing around trying to figure out what to do.  The system to hold the mold was complicated, and there's always the "what if?" factor when trying something new. 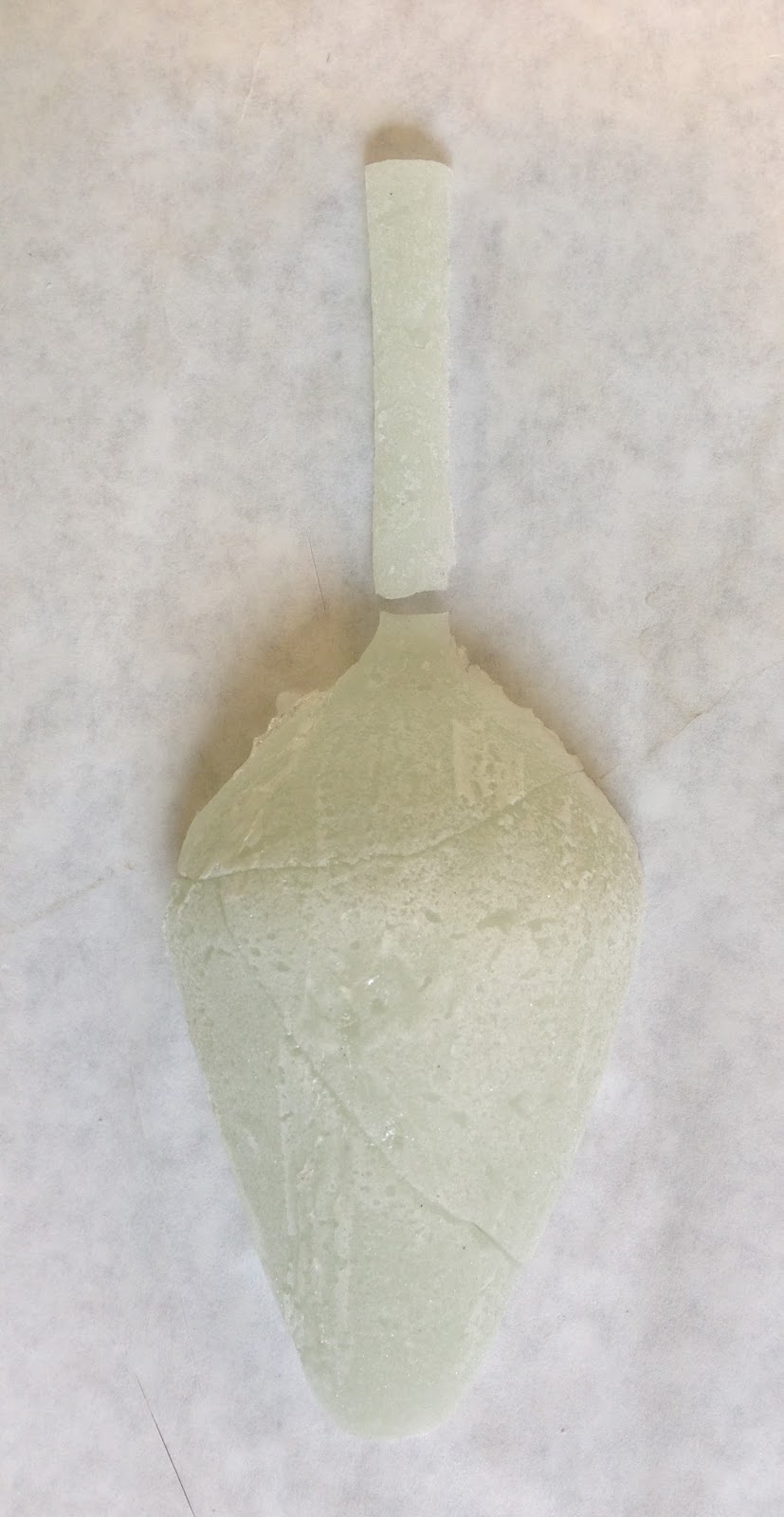 So this was the result of what happened.  Not what I wanted, but not bad on it's own.  This object and the previous two were well liked by some of my classmates and some of the rest of campus overall.  Interestingly enough, this project I deemed a failure.  It did not turn out how I wanted, but that's why we do stuff like this... to figure that out.  Which I believe I have done, now I just need to test it again, and again, and again.  The prep work for the glass "mold" was the same as the previous two.  The housing for it was completely different.  This consisted of placing this vessel halves in a walled off sand pit and bringing the whole thing up to about 1350-1400 F.  The idea was that the alumina mix would be the release and I could pop these out and recombine them. 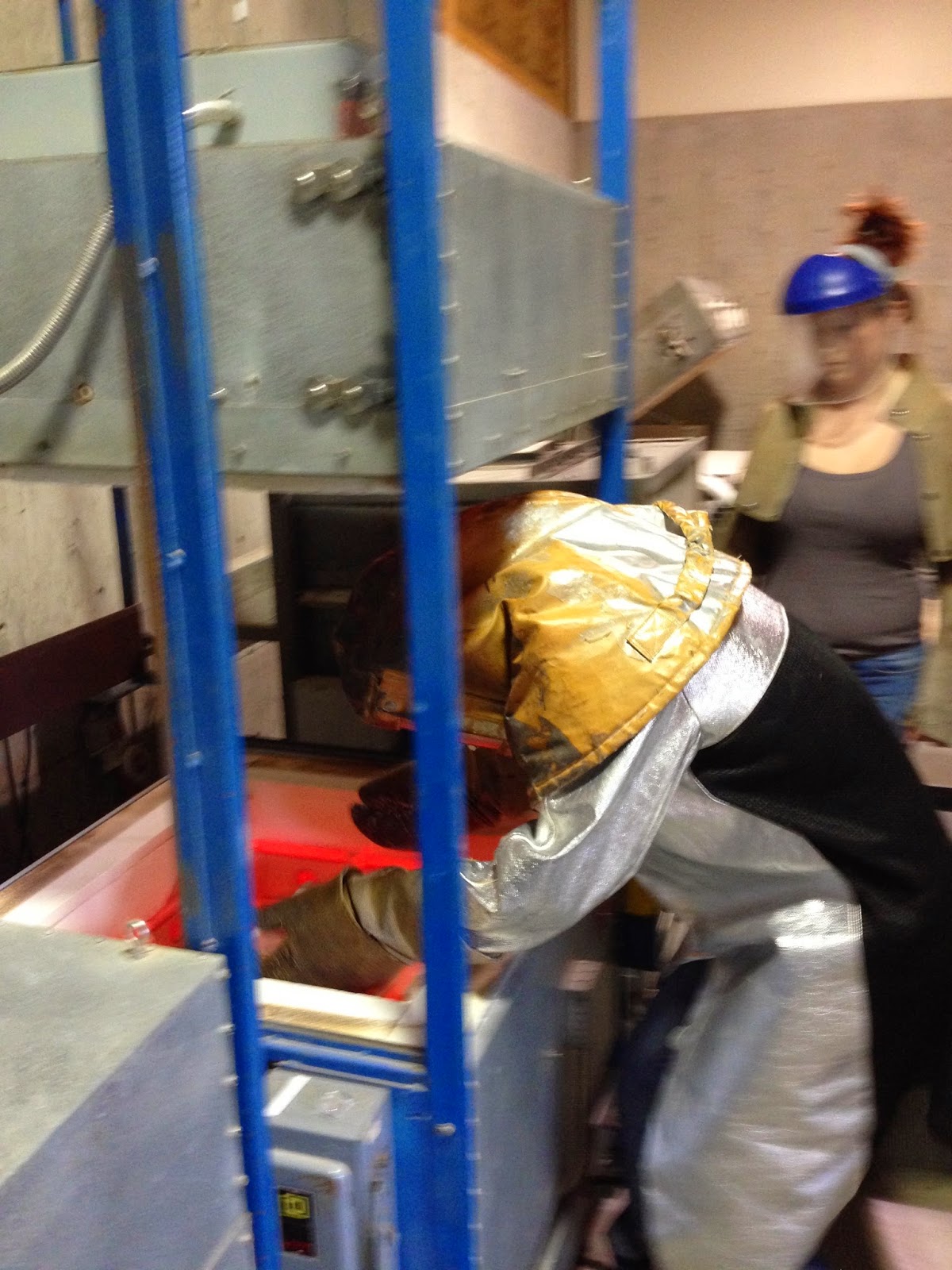 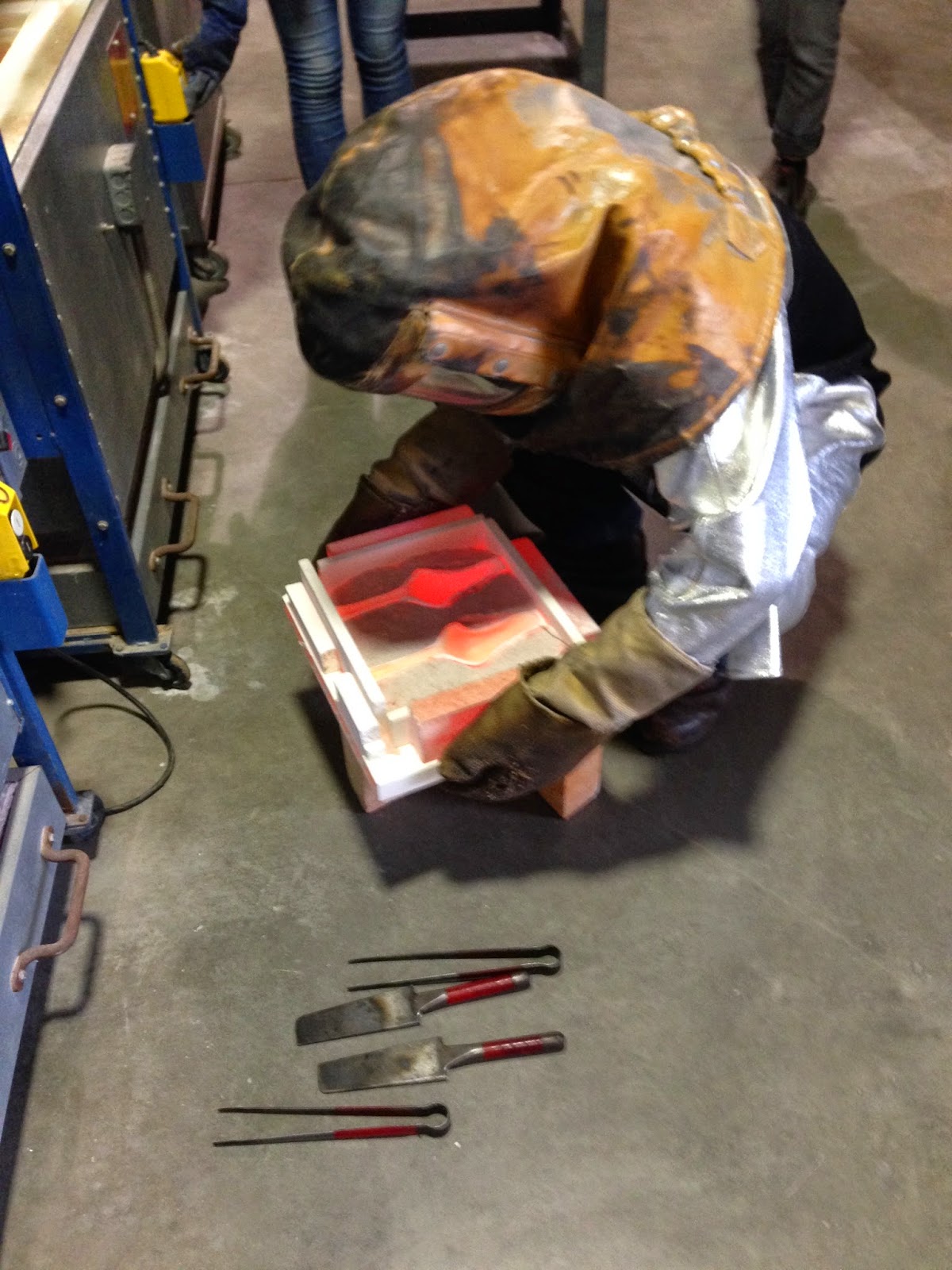 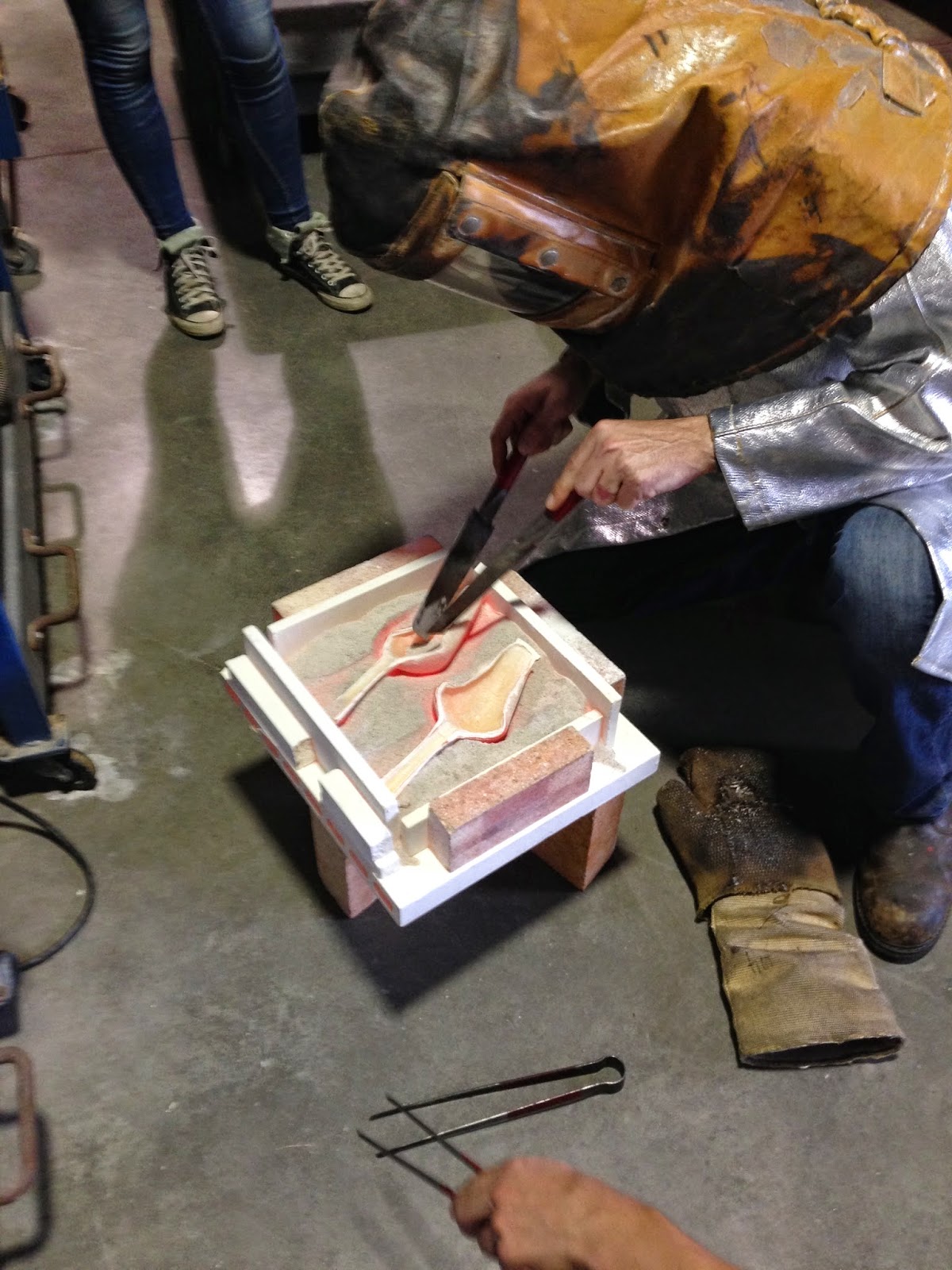 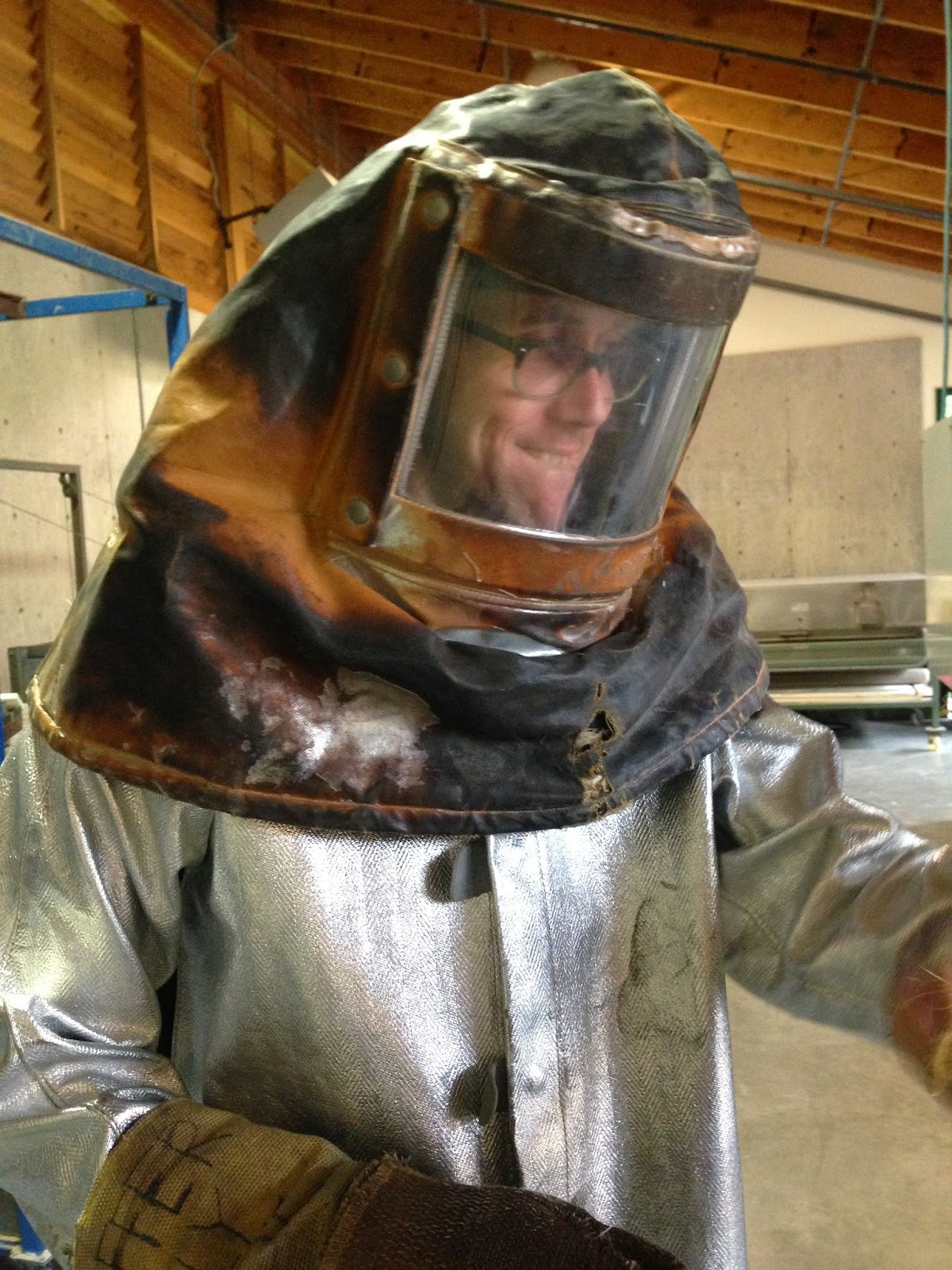 That did not happen... at all... even in the slightest.  However as objects they do reference the history of glass as a whole and have the potential to be displayed a museological works.  This brings to mind Joshia McHelny's earlier work, but only with a reference to the blown form and not the blown form; or it's fragments; being the final object. 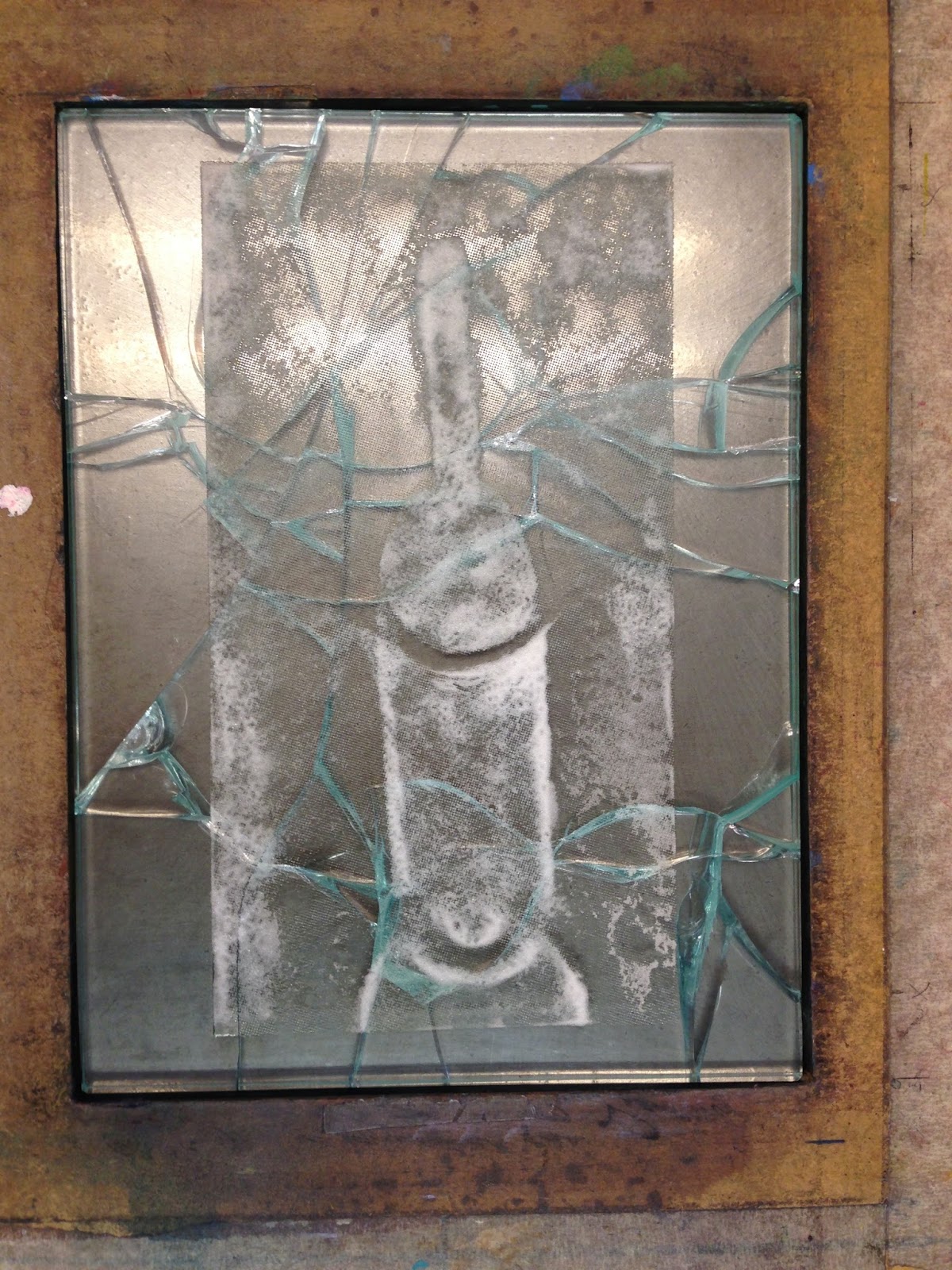 So this is what happens when your embossing plate is too tall to run through the printing press. 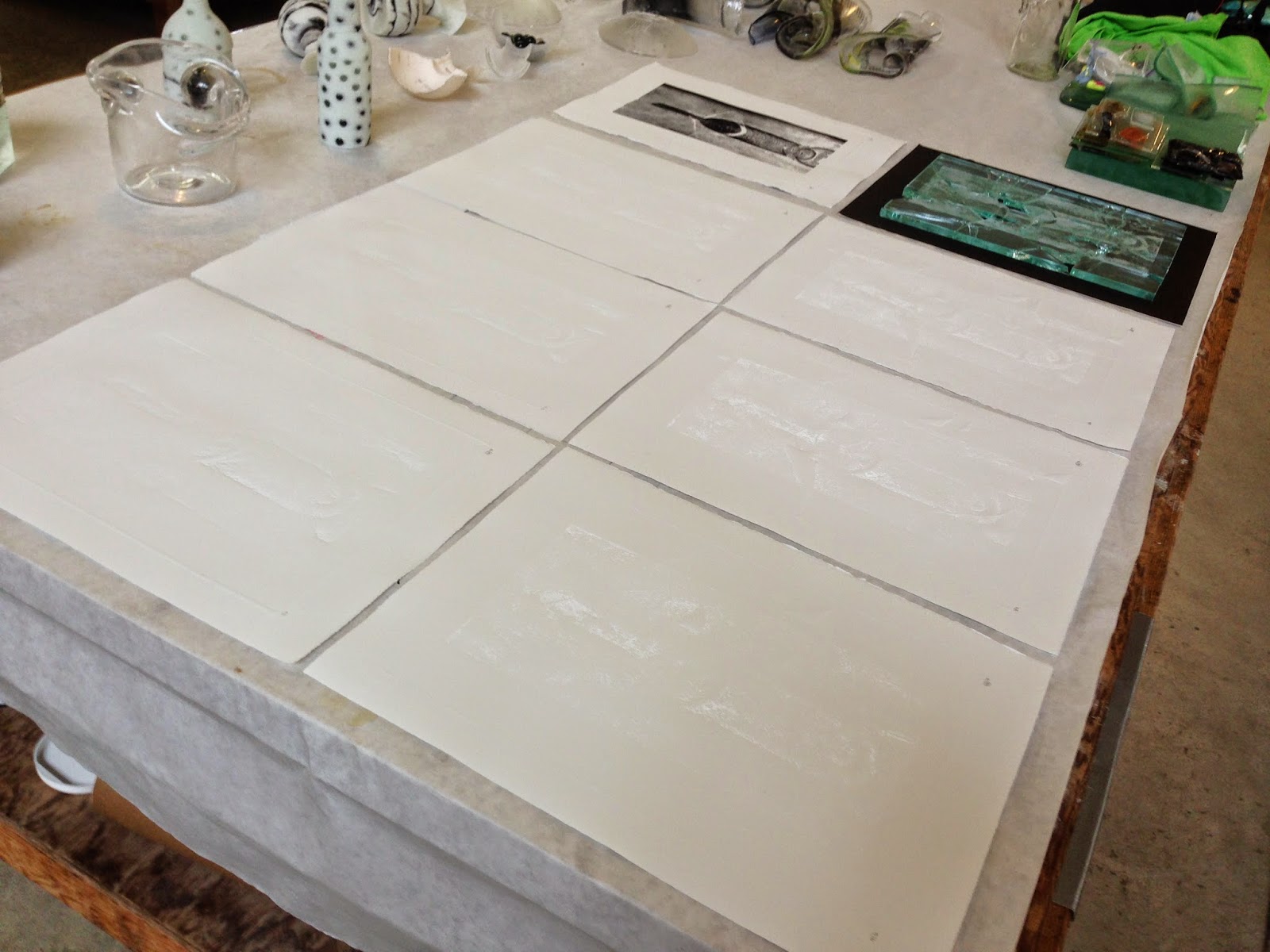 The white highlights you see on the paper is actually micro-beads embed into the paper from the pressure of the printing press.

One of the last things I was able to do was a print run of my intaglio plate from earlier in the session.  Before the print run, I had filled some of the sandblasted areas with micro-beads and fuse them to the plate  The idea was that I could augment the embossment further than what plate could have done on it's own.  It did work, mostly.  The additional mass of the micro-beads cracked the plate in the press.  Normally that's the end of the run.  However, I did notice that in the first proof that the micro-beads were pulling off in the plate and into the paper.  At that point there was nothing to do but finish the run.  As the run progressed I started to separate the larger shards more and even remove some pieces of glass to change the print from whole to cracked at the end.  All the prints are impregnated with micro-beads and are "inked" in a way with light.  This was one of my favorite things I made the entire session.

Again, this didn't turn out as expected but the result is no less interesting.  I would even go so far as to say that if it had turned out as expected it wouldn't have been nearly as successful as a finished piece.  I was even able to tack fuse the plate back together in the kiln again as another piece, but it was barely together again.  Too fragile for transport so it didn't  get sent home.

All together for the session I completed a half tone print (AP), and embossment run (1-6), 2 versions of the same intaglio plate, 2 bottles, 2 slumped goblets, 2 halves of organics(CMC) and glass with 1 vase, 1 piece with organics(flour) and glass, and 1 pulled billet.  For three weeks, I feel that's a good amount of work.  The intaglio plate is the only thing not getting shipped back to Ohio.

Now to try and get a show arranged ohm the second floor of DSB soon.  A few more refined pieces after i get back might be good to throw in there as well, but that's dependent on how soon I have to present my findings for the faculty colloquium.  I believe that's in spring, but I'll know soon.