My how things have changed 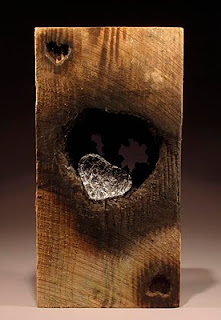 When I first started this project, there were very clear ideas of what I was actually trying to do.  I was attempting to make a head of some sort, mine or perhaps someone else's.  There was going to be drawing, mark making, on the glass to help delineate the features of the head.  There was going to be some type of table with assorted bell jars with different scraps of memory to reference a brain.  There were going to be a lot of things, and a lot of things have changed. 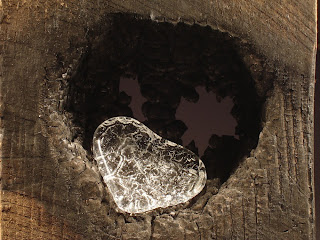 When I make objects, and in glass it's very hard to NOT make objects, I have a very strong desire to work the hell out of it.  Call it OCD, call it the crazies, call it whatever you want, I work and work and work to the point of over working things.  Sometimes I just don't know when to stop.  Sometimes, I just scoff at the idea of less is more.  Sometimes I think my desire to combine disciplines is a smokescreen for not being able to settle on one thing.  I am trying to not do that with this piece, at least I am trying to not that with this piece anymore.  Logistically, I think it would be impossible to pull off my original proposal in a semester.  My classmates can agree I have worked a lot, and I mean a $#@*!^& lot, with little to show in the way of a final project, and time is running out.

There is a reason that clichés are around, more often than not they are true.  One heard in the art world often is "Less is more", one heard in the glass world quite often is "Keep it simple stupid".  One that is particularly hitting me at the moment is "Jack of all trades, master of none".  Simple design was something that I would witness a lot in Japan.  Hand made items there had a strong, yet simple, design sense and an openness that a lot of hand made items of western design lack or is covered up by excess (Chihuly anyone?).  My reference point for this is primarily the glass world, before I get angry emails from people about how I'm calling them slouches... I'm not.

This idea of simplicity, and to a slightly lesser extent openness to interpretation, are the guiding forces behind this piece now until completion.  The glass walls of the box have not changed at all from their construction, the only detail changed here was removing the drawing.  I have started to refer to the project as the box and not the head, most of that has to do with a reference to a head, or still space, perhaps a room, which is all up to the viewer.  I believe by stripping the excess away the viewer can attach whatever they feel applies to this construct of mine.

The front of the box is a different story, it has gone through a few reconfigurations of glass panels and windows.  My final thoughts on this will to be add more windows to the front to completely close off the structure, and to also stagger the windows as well... so it's not just 2 rows of windows, there will be no more point of entry on the front anymore.  The original intent behind the windows were "The windows to the soul", but my windows opened up to brain... not a soul.  Sounded neat when I first conceptualized it, not so much now.

The interior has gone through several reincarnations of what will be inside.  The first idea was the table with bell jars, lots of bell jars, or just cluttered with family items like any coffee table in any house in America.  Then on to stripping that down further to a table with 3 clear bell jars on top, and 3 opaque bell jars hung underneath the table. (I still really like this idea and will probably make this it's own piece in the future) A mirroring of good and bad thoughts.  Finally on to a chair, made out of the door I originally wanted to make into the table in the first place.  This chair, made out of a portal, is now the center of this little glass world of mine.

A physical, spiritual, lonely, exhibitionist, etc, etc, chair now occupies an isolated, enclosing, safe, fragile, bright, etc, etc, space.  What will it be to the viewer?  I don't know, but I do look forward to finding out what others will think of it, and what their stories are, when it's done.

I was planning on doing this post at some point but a few things prompted me to do this now.  Nicky's conceptual post, which is a great read and you can find here.  The other is Woody's reply to the previous blog entry.  He's curious, as I think all of my classmates are, about what the hell is going on in my head... and I have to thank him for bringing it up.  He's my classmate, it's his job to do that.
Posted by Chris at 3:37 AM 3 comments: